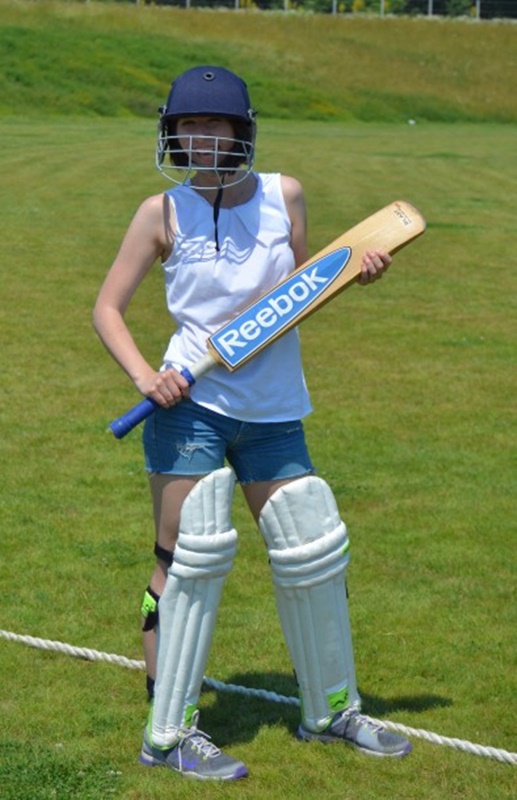 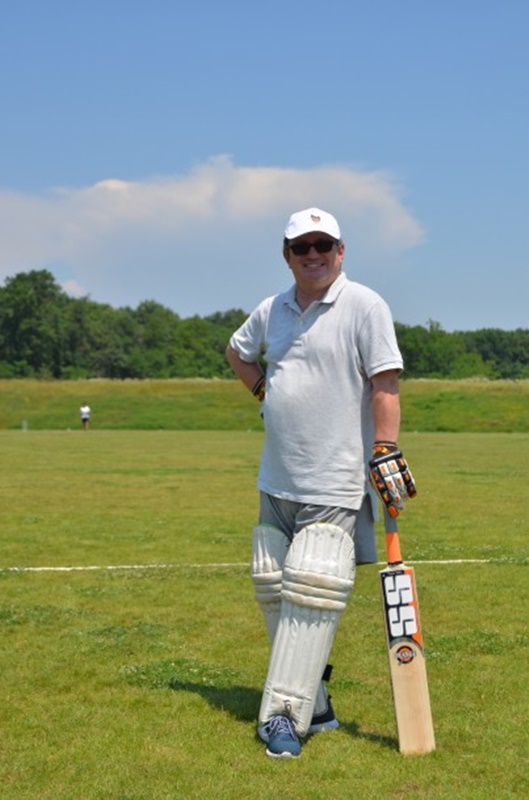 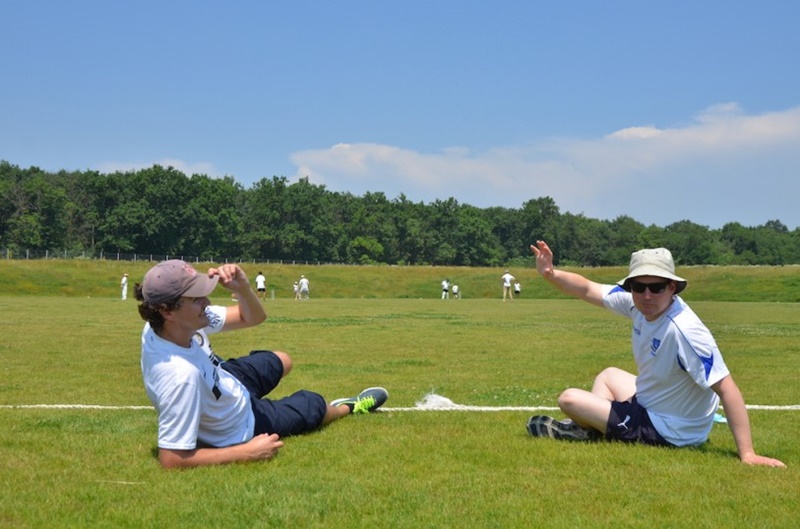 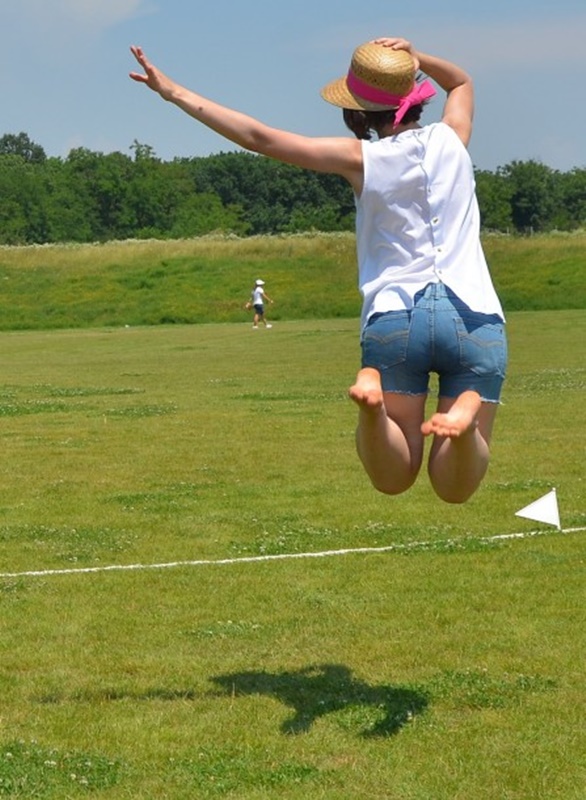 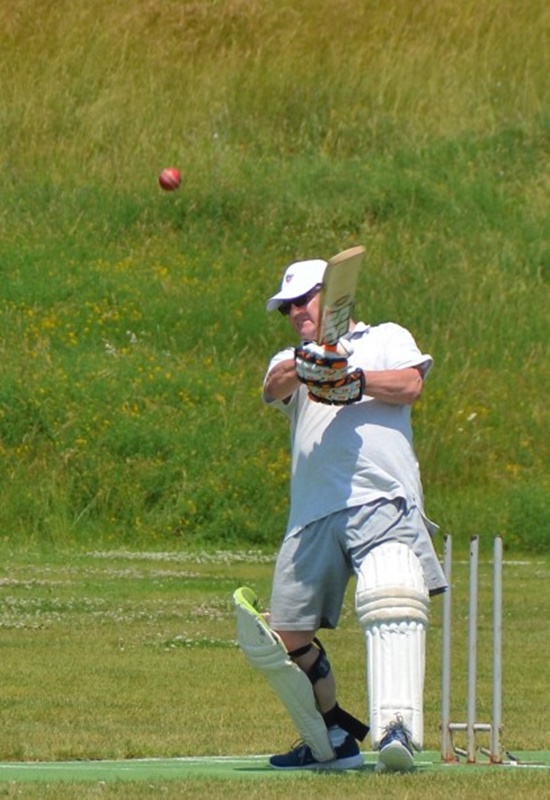 And so it proved on the 14th June as 16 good men and women true met together at the Moara Vlasiei International Cricket Ground to do cricketing battle for the honour of the PTF trophy.

Teams were allocated on a somewhat random basis as we mixed staff, parents and students and ended with a harmonious compromise: all the ringers in one team and the ‘fledgling-newcomers-to-the-great-game’ on the other. The Student team, led confidently by Steve won the toss and chose to bowl and then Steve was told in no uncertain terms by his dad that they had changed their minds and wished to bat: so much for the sanctity of captaincy!

The Student/Parent team began at a gallop scoring quickly as the fielders struggled with two basic issues in the field: a) the ball is hard b) a spectacular full length dive for a catch counts for nought if you then drop the ball.

Nayva’s dad and Steve’s dad showed the two teams how cricket should be played and both retired at appropriate moments never having been threatened by the Staff pace bowling. Indeed Walter hit one ball so hard the fielders in the deep were taking cover and donning protective helmets as it sailed towards them. The Sequira offspring showed moments of sparkle at the crease but only briefly. The surprise package was the Hewett axis who accumulated loads of runs before one Hewett decided to cause a marital tiff by running the other one out. Ouch! Questions will be asked over Sunday dinner about that one: the classic cricketing call for a run had been heard, here in the depths of the Romanian countryside: ‘Yes!!…No!!…Sorry!” That combination of words has been heard on cricket fields from Adelaide to Bangalore and from Wellington to Old Trafford.

All that remained was a cameo from Ms Blessy and new cricketing devotee, Mr Silviu, who, without really realising it introduced the ‘Switch-hit’ into Staff/Parent/Student cricket.

The staff side began in effective style: Mr Afzal (A.K.A. Chris Tavare/Geoffrey Boycott/Michael Atherton), dropped anchor at one end and seemed to think it was a five day test match. However, the scorebook never lies and the redoubtable Shaikh was never winkled out by the bowlers: retiring unbowed in the last 2 overs.

The staff had some newcomers who struggled somewhat with the rigours of the bowling; Ms Andrea, Becky and Mr Storey & Ennion fought gallantly if briefly and were soon making the long lonely walk back to the sun umbrella. Cue the secret weapon: Andrew; the representative of ‘Cricket Romania’. He was given strict instructions by me in what I deem one of my finest inspirational talks: ‘Go in,” I said. “Hang around, strike out, Mister Afzal is not progressing us quickly enough… push on, Andrew, and drive us to the finishing line!!”

2 minutes later Andrew returned, out for nought with a rueful expression; “That’s cricket for you!” It said.

Afzal and I then tried our level best and with some streaky hitting and pure slogging we pushed us on to within touching of their total. We knew we were close because they stopped discussing their holidays in the South of France and Steve and Ken were brought back to: ‘bowl straight & keep them quiet!’ Ms Jane joined me at the crease for the final two overs but the run-chase was not quite to be. We fell tantalisingly short.

Staff 111: the dreaded ‘Nelson’ for those who know their cricket superstitions.

A brilliant game, terrific spirit, oven-hot but enjoyed by all. Many thanks to Andrew for arranging the event, the drivers, the parents & students but mainly my team…’We band of brothers and sisters…’

“Cricket to us was more than play; it was a worship in the summer sun.”,  Edmund Blunden